While senior citizens are worried about Climate Change and the possibility of fracking, it is young people who will bear the brunt of the bad decisions taken and fossil fuels burnt over the past 100 years.

Student, Dominique Clinckemaillie (16), joined the Howick Global Climate and Frack Free March in November 2015 and took gorgeous photos from the back of a police van – like this one of Yvonne Munk. “People power does work,” said Yvonne waving a bright banner which said Think Outside the Barrel. The hundred people who marched with 785 000 other people around the globe repeated the message to leave fossil fuels in the ground and invest in renewables instead. Many of those who marched already personally demonstrate alternates to business-as-usual energy production, realising that one cannot say no to fracking without providing viable alternatives, and that livelihoods will be destroyed by fossil fuel exploration.  We have seen the impacts on our local weather, on food prices, and watched in horror as tragedies unfold across the globe. 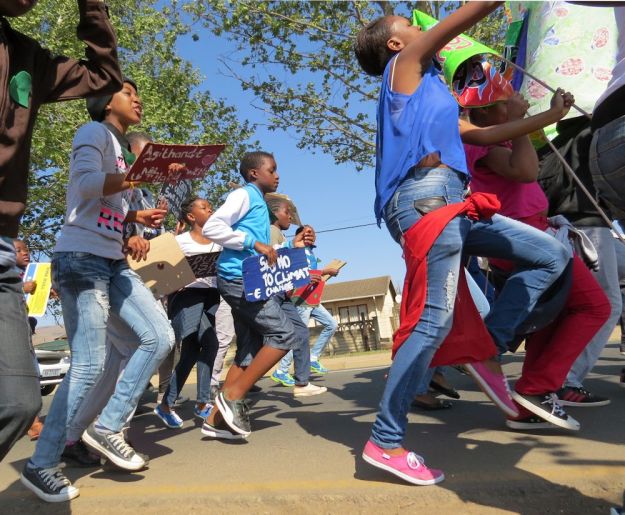 Across Africa, thousands of people called on their governments to take real action by holding the global north accountable for starting climate change, and by ditching coal and investing in clean solar and wind energy in their countries. ‘Angifun’ ifracking’ shouted a banner, another suggested we need ‘Farming not Fracking’. “Fracking could destroy our water resources.” Said Penelope Malinga of the Mpophomeni Conservation Group “We can’t drink gas. We need clean energy. Amandla elanga kunegas.”  Fracking is a real threat in the midlands unless we reduce our energy consumption drastically. Many other banners focussed on clean energy. “It is possible to have a meaningful impact by simply focussing on your own energy consumption at home. Small changes add up to big things.” said Karen Zunckel, initiator of the KZN Midlands Green Map that lists many of the sustainable options available right here. “We have to do this, or we are stealing our children’s future.” Candy Zuma hit the nail on the head with her banner. Environmental impoverishment links directly to human suffering. 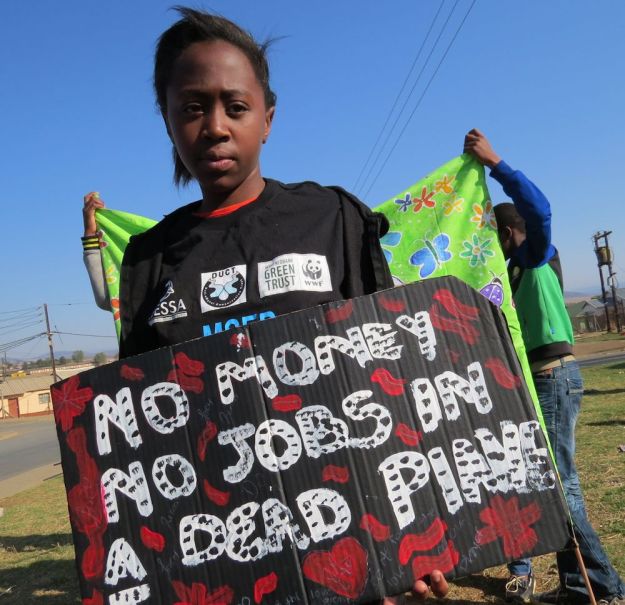 Nikki Brighton, member of Frack Free SA “It was good to link the very current topic of Fracking in KZN with the Global Climate March – the worldwide message is to leave the fossil fuels in the ground and invest in renewables instead. We need to demonstrate (and many of those who marched today already are) altenates to business-as-usual energy production.  Renewables are growing at an astonishing rate and become more affordable, this sector is also growing at an astonishing rate.  We realise that you cannot say no to fracking without providing a viable alternatives. Most municipalities want to know about job creation – so demonstrating alternatives is vital. We also need to show how livelihoods will be destroyed or damaged by fossil fuel exploration. In rural areas communities rely heavily on natural resources (we all do, obviously, but perhaps not as directly.) Promises of short term jobs will leave people far worse off in the long term.”

Ban Ki-Moon UN Secretary General “Time is not on our side,” he said, “We cannot delay any more, change needs to happen now. We are the first humans to ever breathe air at 400parts per million CO2.” 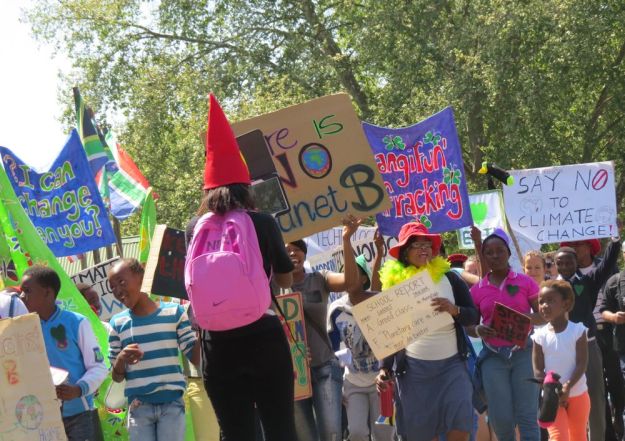 Passionate Dominique wanted to capture the gathering from a different perspective, so she hitched a ride. “I think it says a lot that an officer allowed me to jump on. I wouldn’t have been able to do so without his go ahead. To me, that shows that we’re all in this together – a symbol of unity.”   Dominique believes young people who are witness to the crumbling planet, must stand up to protect their future.  Dominique’s act speaks for many others. “I am standing forward – defiantly representing the voice of the youth. People think that we take everything for granted. That is not true. We are strong, unafraid and aware.” There is no age barrier to being informed, active and fighting for our rights not only as South Africans but also as human beings. Dominique and Yvonne are both activists, concerned not only for their own wellbeing but for all life on our planet.  If you missed your chance to protest, see all the photos here: facebook.com/frackfreesa and watch the video here: vimeo.com/147437369 and join us next time. Judy Bell a member of Frack Free SA concludes: ” This is a human rights issue, as along with global development, climate change is already starting to affect the quality of the air we breathe, as well as our capacity to provide safe drinking water and sanitation, sufficient food and secure shelter. The World Health Organisation expects there to be an additional 250 000 deaths every year from malnutrition, malaria, diarrhoea and heat stress alone. We all need to look at ways we can reduce our emissions of greenhouse gases through making responsible choices, especially regarding transport, food and energy. Adding Fracking to this toxic mix will be a nightmare! We must commit to becoming more informed and involved. We must take every opportunity to influence decision-making in terms of development at the local, regional and national level. This can be at home, at work, in our communities and municipalities. We must all do our bit as all the small changes will have a big impact. ” Start your journey to a fossil free future today, whatever your age – it is a great adventure!

Think Outside the Barrel