“Are your ears just ornaments?” asked an audience member at the recent Rhino Oil & Gas meetings held in the Midlands “Why have you come back when we have already told you NO?” Clearly, it is not a good idea to hold meetings about exploration that might lead to water intensive fracking, during a drought. Hot and thirsty people are often cross. 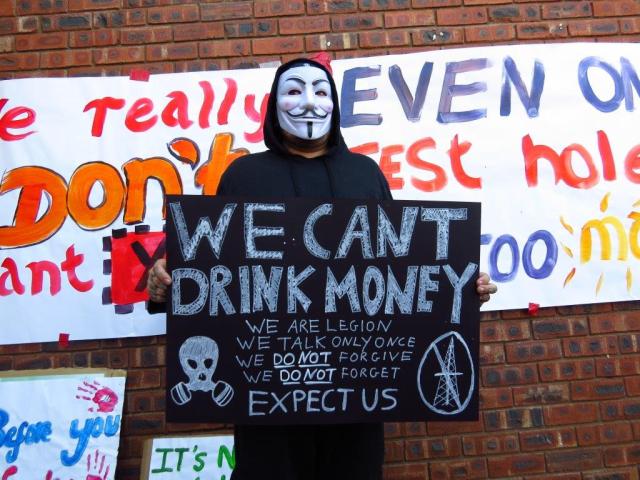 After the chaotic and poorly organised meetings held in October last year, SLR Consultants (contracted by Rhino Oil & Gas) arranged a second round of meetings with bigger venues, public address systems, professional facilitators and translators and security guards (both visible and in plain clothes), in early February 2016. Things didn’t go quite according to plan as despite their best efforts the protestors were difficult to control. 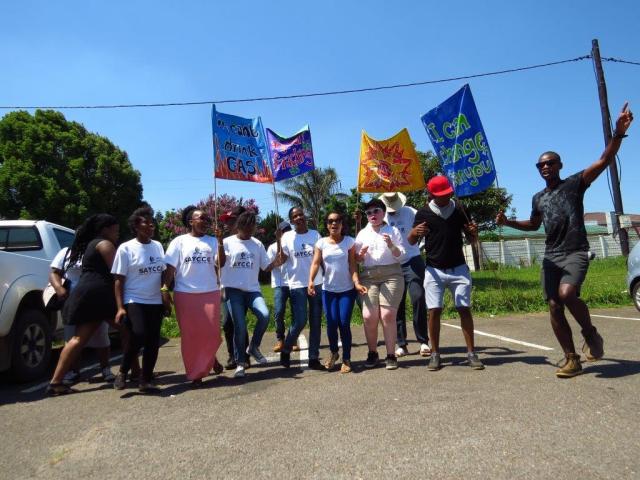 At the first meeting of the week, held in Howick, they tried to impose their Agenda which included a two hour ‘information session’ before questions would be taken. Fortunately, a sharp member of the 230 strong audience pointed out that Agendas should start with Confirmation of the previous Minutes (which they had promised to provide but never had) and Matters Arising and eventually they conceded as the crowd grew increasingly agitated. There was also insistence that everything be translated into isiZulu.  “You are disrespectful. I am asking you respectfully to please respect us, our children, our Chiefs and nature.” said Stella Hlongwane, speaking in isiZulu. Noluthando Nzimande of SAYCCC (SA Youth Climate Change Coalition) added “We want to learn about you – your family, your neighbours, the area you are from. How is the water situation there?” 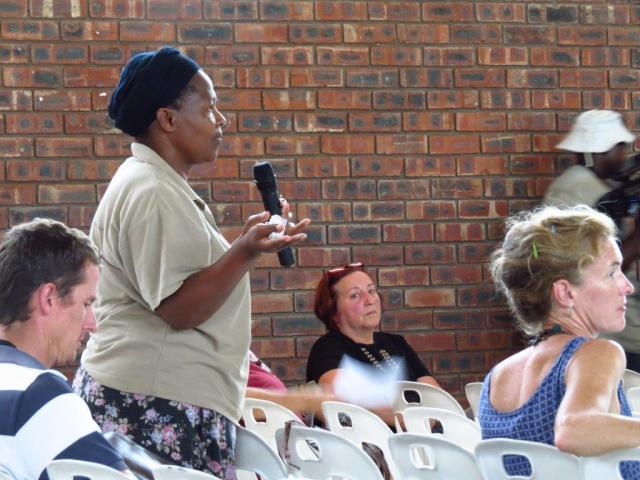 Many hands shot up to ask questions and were allocated a number.  The facilitator told participants “I am not going to promote a dialogue” when anyone asked for clarification or spoke out of turn.  Ben Goodwin asked her calmly “We are obviously united in one call. How seriously do you take our objections? If this was a truly democratic process, it would be clear that we don’t want you here.”  Pandora Long of DUCT challenged them “Your Background Information Document states that that the process will include informative, transparent and accountable decision making. You have not answered ANY of our questions from the last round of meetings.” Paul Fleishack was disappointed that, despite having registered as an IAP, he had received no information or notification of the meetings. 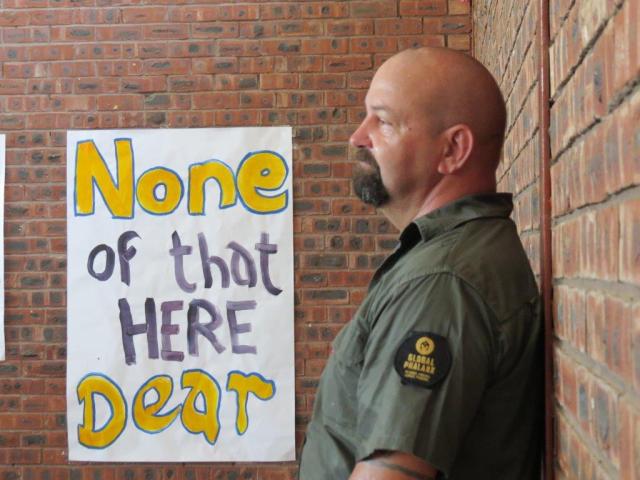 Phillip Steyn, COO of Rhino Oil & Gas sweated profusely in the oppressive heat and was unable to answer questions satisfactorily, many of his replies were patronising and met with shouts of “propaganda!”, “bulldozing!”, “I’ve had a gutsful of this nonsense!” “It’s a fairy tale!” 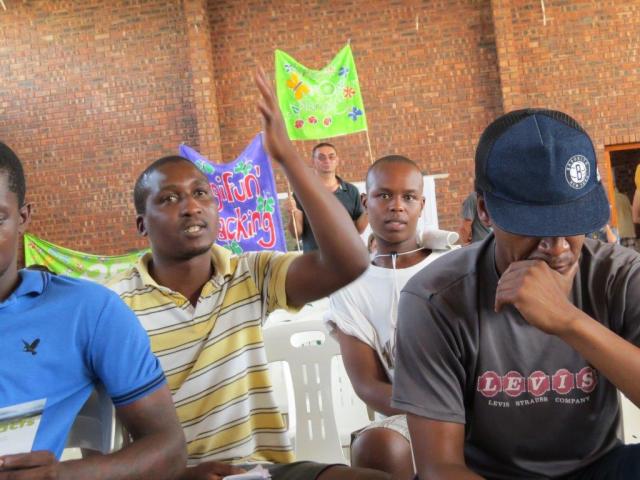 He appeared to have some facts muddled – was the core drill only two and a half inches in diameter when the image in his presentation looked far larger?  When asked about the effect core drilling and seismic testing has on soil life, the Rhino geologist Travis Smithard replied that it was like ultrasound used to listen to unborn babies, the vibrating machine in a gym or driving a bakkie over the ground! This despite the Background Information Document prepared by SLR of possible impacts of exploration that states that seismic testing could disrupt ecosystem functionality. 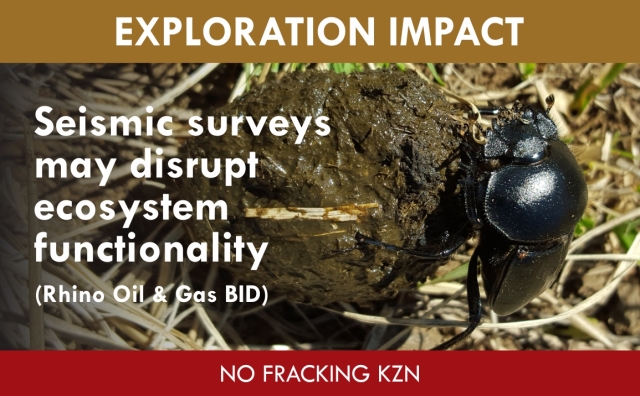 There were quiet moments amongst the noise. A mother went right up to Phillip and spoke to him gently. “You do realise we are trying to protect our children, they are the voices of the future – we have to listen to them. How can you stand in front of all this anger so calmly?”  Lindiwe Mkhize walked onto the stage behind Phillip with her very clear message. When loud and animated, Nhlonipho Zondo joined her, they were both escorted off by the men from Global Phalanx Security. 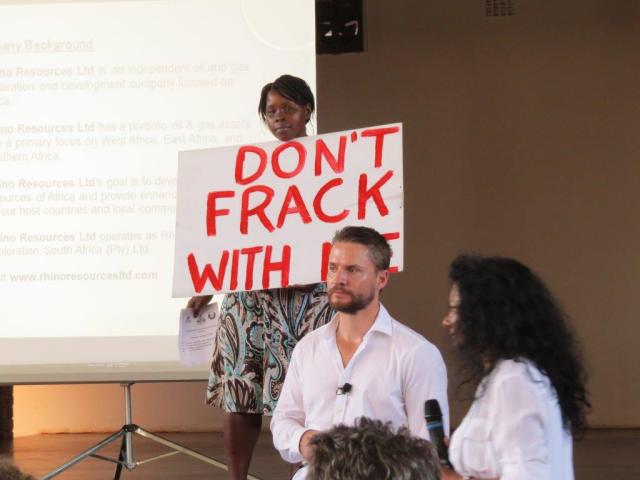 When asked why he didn’t invest in renewables instead, Phillip told the audience (many of whom used public transport to get there) “If we switched to renewables you would have to stop driving your cars. Locally produced gas will be good for South Africa.” He went to great lengths explaining that SA imports 155 million barrels of oil a year and his solution would save taxpayers millions of Rand.  He didn’t reply when asked if he thought it wise to replace one fossil fuel with another and was at pains to point out that despite the current low oil price, the market would recover to ensure his was a profitable business. When challenged with the fact that SA had just committed at CoP21 to divest from fossil fuels and move rapidly to renewables, Phillip replied that he believed ‘with all his heart’ that gas was the bridging fuel that would help us transition to renewables.

Charlie McGillivray was unimpressed. “You arrive as though you are an economic messiah, but I have never been to such a dog show in my life. All afternoon we have sawed sawdust.”

A small group stayed as the sun set asking detailed questions. The police were bored. “This is a party and a waste of our time.” one said tiredly. Penny Rees invited Phillip to join her on her next river walk to see for himself the state of our rivers – our precious and dwindling water resource.  The meeting adjourned just before 7pm. 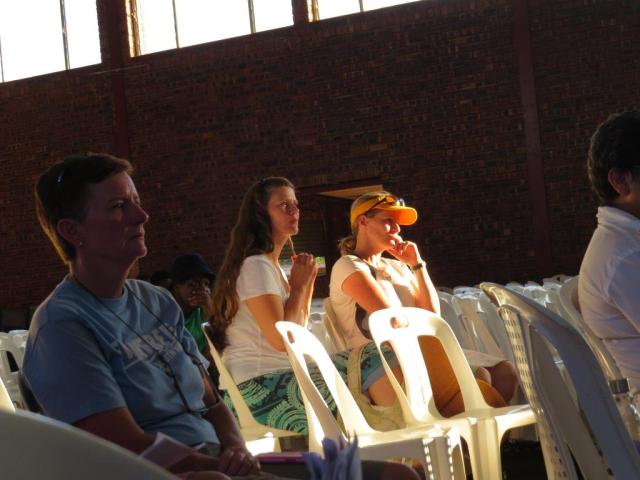 In Mooi River the crowd was smaller and less noisy, but just as angry. Farmers who had taken precious time off from their land and animals to attend were unimpressed with SLR’s explanation as to why such an enormous region with so many water sources and protected areas was included in the application, when in reality only about 1% of the area is actually suitable. Matthew Hemming of SLR replied “Because there is nothing in the legislation that says they can’t.” Someone asked “What happens if something goes wrong when you drill just outside a protected area?” Matthew responded “Legislation provides protection if something goes wrong.” 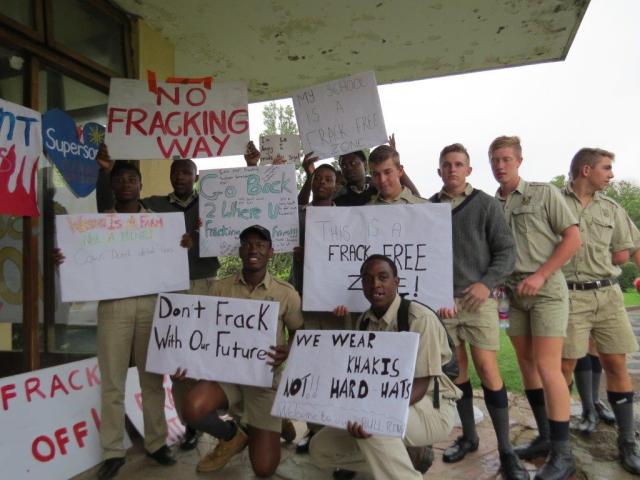 Weston boys know where they stand

The vague replies were met with derision.  “Do you have internet?  It seems we know more about these things than you do.” quipped Ricardo Rassen of CYPSA (Concerned Young People of SA).  Phillip Steyn was asked to answer Yes or No to some statements.  “There are real documented, health, environmental and social risks associated with all phases of assessment, exploration and subsequent possible production of these oil and gas reserves?”  He answered yes to all and admitted that this was a ‘high risk, high reward business’. We all know who will be rewarded and who will be left with the mess.

When asked by James Kean to define ‘the right’ that Rhino would have to explore, Matthew  explained that the landowner’s right and the mining company’s right were equal and that if the landowner was obstructive, the government had the power to approve the right of the mining company. Phillip Steyn acknowledged that Rhino would enforce their right if it was in the interests of the country and their company. Even when asked, by a member of the local Ministry, if he, Phillip, as a human being, and a South African, would release his rights to this exploration, and not pursue it any further, for the sake of the community and their health, Phillip indicated he was going to carry on. 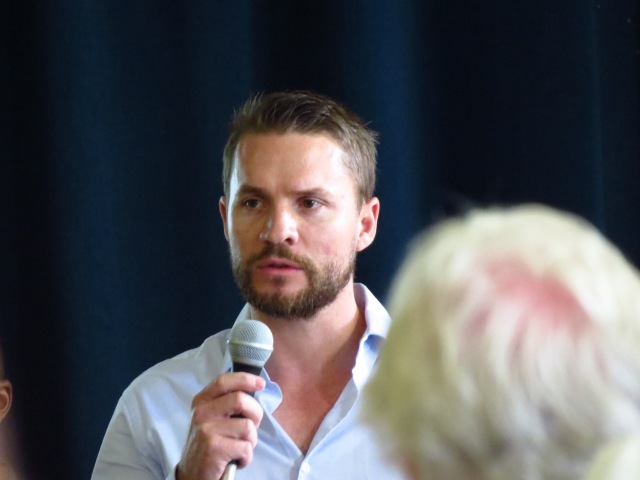 Water was, of course, an issue on everyone’s minds.  Particularly in Greytown where 800 people packed the Community Hall, questions revolved around risk and health impacts, environmental impacts and empty promises of jobs. A farmer asked if Rhino was going to ask for water rights (which would infringe on the existing rights of users) Philip answered in the affirmative. Phillip hid behind the process, the fact that PASA makes the decisions, but was constantly reminded that he was in fact the one that makes the decision to continue.

A common refrain throughout the meetings was “Why have so many countries banned fracking?” and “How could South Africa, a third world country, hope to improve on safety standards?”  Rhino indicated that they would hire experienced first world contractors (oops, there go the jobs) and be the first company to undertake fracking or extraction without any incidents. This would be a remarkable achievement, not accomplished by any other firm in the world as far as we are aware! It was clear that they think that that once a well has been fracked and the methane ‘burned off’ it can be abandoned and pose no further risk. Do they really believe that the concrete casing will not eventually degrade and leach heavy metals into groundwater?  Have they not heard about acid mine drainage?

Francois du Toit said afterwards “No amount of jobs or economic benefit can mitigate the potential health, social and environmental  impacts of an invasive and apocalyptic industry, fuelled only by greed and benefit for a small minority. The real issue is that the community and the general public take all the risks and the companies and government take all the reward. An infringement of our constitutional rights cannot be justified in the name of a growth economy.”

Eventually the crowd, led by a local elder who had opened the meeting with a prayer after the audience had requested so, resolved that they didn’t want this process. There was a mass exodus utterly rejecting exploration and the possibility of fracking.  How much clearer could the message be? 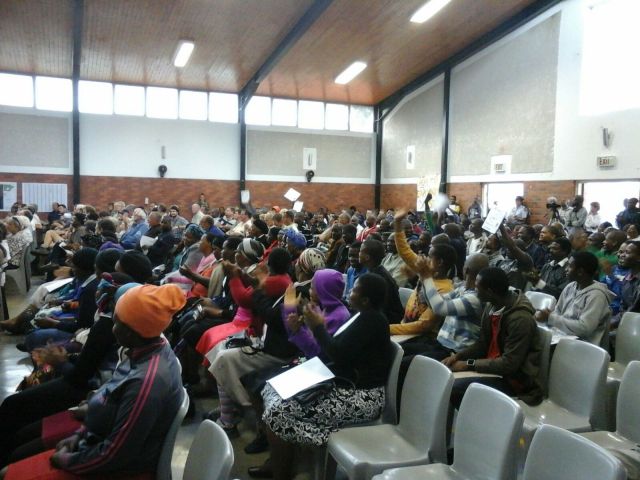 We do know however that the facilitators are not interested in people’s opinions – these public meetings are simply part of the process. In fact Matthew Hemming commented at one “We can play this game all day”. They might be watching the game and even using the rules, but the farmers and communities on the ground are playing it, and could get hurt.

We need to ensure that the Government demands a full Strategic Environmental Assessment for the entire area – and that there is a moratorium on issuing any Technical Cooperation Permits for exploration until that is complete. Our message was loud and clear. 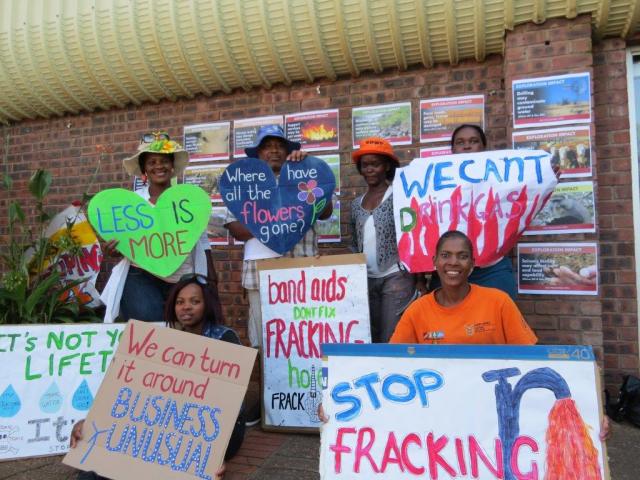 All week television film crews were on hand to capture the action and anger. Watch out for Carte Blanche, 50/50, SABC and eTV features – we may learn more about the process on television than we did at the public meetings.

This is no time to presume that someone else will be preventing unconventional gas exploration and extraction from affecting our health, the quality of water we drink and the air we breathe, while further placing our food security at risk. It is up to us.

One thought on “Hot, Thirsty and Angry”